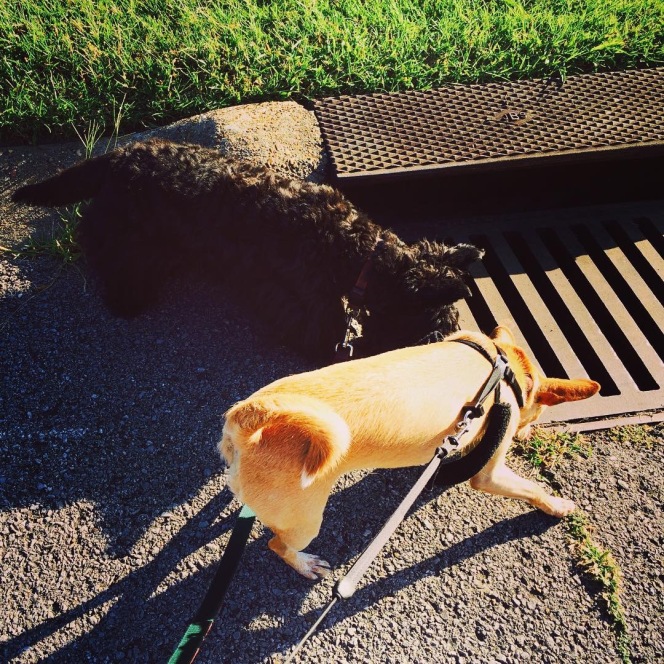 Monday – I had a whole bag of those little chew sticks ready for Arya so I could sleep in every morning but surprisingly Arya curled up at my feet on the couch for a bit, chewing a bone and then sleep. Jack is still standing at the cat door.

Tuesday – Lenny and Sammy are here! Lenny and Sammy are here! Arya was VERY mean to Lenny, growling and pinning his tiny little neck to the ground. She would not let up. His mom is pretty nonchalant about that stuff saying, “Oh, they’re just excited” (I don’t thing Lenny was very excited.). Jack gave them a cursory once over and then went back to his spot at the cat door.

Wednesday – Good thing I had the chew sticks! Having Lenny lying on the couch with me proved just TOO exciting for Arya. She happily went into a crate and chewed away until she went back to sleep.

Thursday – Arya has her groove back and was calm enough to sleep with me on the couch along with Lenny and Sammy. She sleeps at my feet, Lenny sleeps on the pillow with me, and Sammy sleeps on my waist. I felt supremely honored when Jack left his post at the cat door to lay on the floor beside me while I petted him. Said laid on his dog bed on the floor by the end of the couch and I have to say, life doesn’t really get better than that.

Friday – You know how I usually love the sound of Jack’s feet on the floor? I thought I was going to have to put socks on him this a.m. He came in and out of the room again and again. I got up thinking he had to pee, but no, he just wanted breakfast. My telling him that nice dogs don’t get up this early had no effect on him. The boy has self confidence. I’ll give you that. I wasn’t getting much sleep because Lenny and Arya were switching bones very 30 seconds. Which involved one of them walking right on top of me to get to the other side of the couch. They are very good about sharing (yeah, they did get over their differences in less than 24 hours), more like two dogs that live together, not just friends.

Saturday – Jack has discovered that if I am making them all stay out for a while and he has to leave his post at the cat door inside, he can just as easily go to the back door, or one of the windows downstairs and bark madly at them and still fulfill his cat duties. Arya’s duty seems to be to bark at anything that moves or anything that seems like it’s thinking of moving. They are both hyper-aware, aren’t they, though? I am trying to rescue a little dark gray kitten (I first saw it across the street one evening playing with fireflies!). It spends a lot of time in my back yard and on the “patio.” Arya spotted the little thing from the window and went nuts. Good security team if you are ever invaded by a hoard of cats.

Sunday – I went to bed late and Arya and Lenny were still wrestling. Jack moves away from the cat door more often now, sometimes even coming to sit at my feet. Seriously, he has hardly been able to leave the door to eat, and I feed him in the living room 4 feet from the door! I took the day off yesterday and I’m sure glad I did. I went out to shop and when I left the store it had started pouring rain. I mean POURING. And thundering! When I got home all of the dogs were in the bathroom. Even Said seemed to be coming out of there. It stormed for what seemed like hours and all the dogs cuddled around me.

It has been so nice to have your crew here. Said just loves them, and I do too!